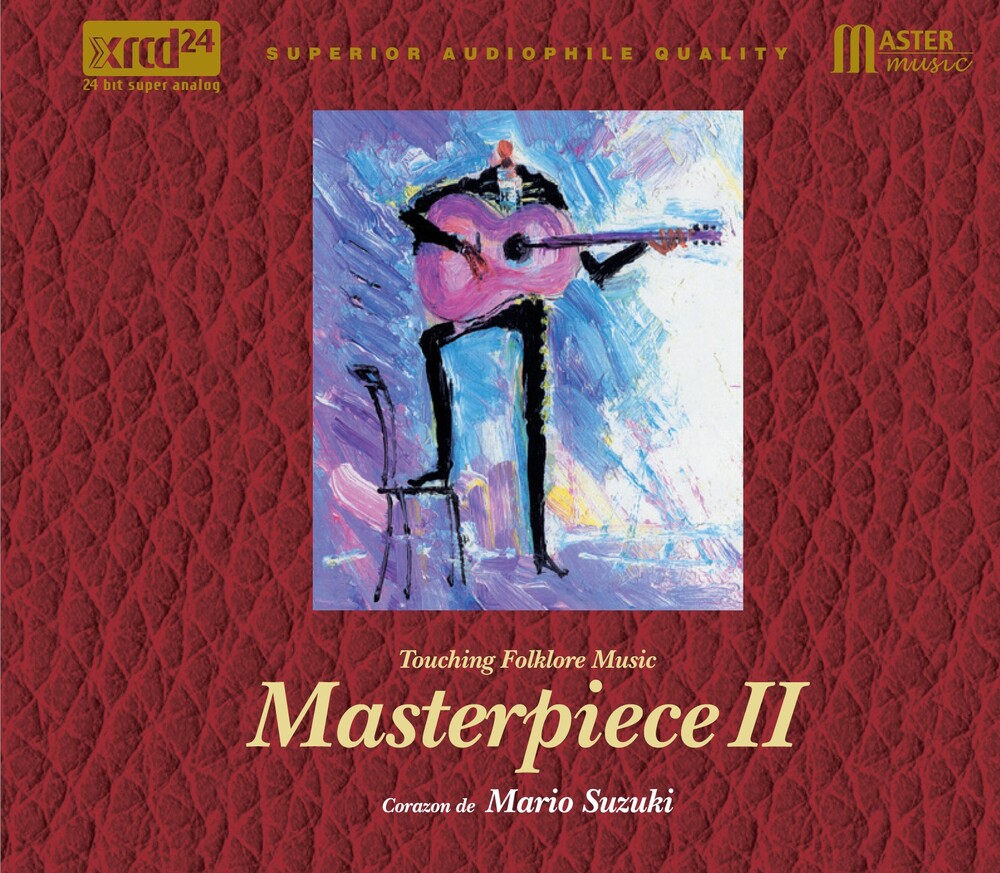 Masterpiece II is an analog tape recording using 1/2 inch, 76cm/sec high speed. It is rare to find a CD made in AAD!
Mario Suzuki is a writer, composer and excellent guitar player! Suzuki is an extraordinary individual who you may not have heard of... but once you hear him play, he is hard to forget. To capture the purity of the recording, a half inch analog tape at 78cm/sec speed was used. While most CDs have been fully digitalized, DDD, this rare recording was captured in AAD! You will experience a deeper passion, emotion, warmth and such an accurate tonal balance and delineated guitar sound that you will truly be amazed!
Folklore guitarra is the traditional Spanish folk guitar music popular in the Spanish speaking countries in South America. It also includes contemporary guitar music which carries on much of the tradition of the folklore guitar music. It is of a completely different type either from American style modern folk music or pop folklore band music.
Born in Tokyo, Japan in 1947 Mario Suzuki is a native of Japan. He has learned music composition and folklore guitar playing from Mr. Atsumasa Nakabayashi. He also learned folklore playing from both Jesusbenites ( president of Mexican folklore guitarra association) and master folklore guitarist Eduardo Falu in Argentine.
Mario has composed amazingly more than 500 pieces of folklore music. In their praise for Mario Suzuki's performance and composition, Eduardo Falu and Atahualpa Yupanqui, prominent Argentine folklore guitarists, called Mario "a genius of folklore music."
It is often said that non-Spanish folklore guitarra players to play folklore music perfectly is almost impossible. As though Mario wants to defy that common belief, Mario has mastered and plays folklore guitarra perfectly and thereby, Jesusbenites said Mario is a reincarnation of Quechu tribe and carries on the soul and spirit of an Indio.
Mario has also composed music for movies. In this XRCD24, track No. 6 is from the soundtrack for the famous movie titled "Shin-Yukiguni" or "A New Snow-Village" that Mario has composed.. We hope you enjoy touching folklore music and Mario's unparalleled performance of folklore playing and fantastic music Mario has composed.
This recording of guitar music will let you experience XRCD24 sound as you never have before!
Analog Tape Recording and XRCD24: It is often criticized in serious audiophile community that the sound of CD has a lack of warmth, passion, emotion and delineation. In order to avoid these lacks, JVC did something very special in the recording of Mario Suzuki. While the most of CD recording is fully digitalized, JVC choose the analog tape recording and selected the 1/2 inch wider Analog Tapes and the highest tape speed of 76cm per second to seek the most faithful recording possible to original source.
The XRCD24 mastering has been taken care of Mr. Tohru Koetsu of JVC using custom designed Analog Console and K2 24bit Analog-to-Digital converter. The entire operation has been controlled by K2 Rubidium Clock to make 24bit Magneto-optical Master Disk. The 24bit MO Master Disk has been sent to the manufacturing plant.
At the JVC manufacturing plant, the XRCD24 has been directly laser cut from the 24bit MO Master Disk to ensure the purest sound quality to original source. The XRCD24 has been produced through exclusively designed XRCD mastering studio to the manufacturing. This unparalleled care of from the original source, mastering to manufacturing will bring you warmth, passion, emotion and delineation in addition to entirely new level of listening enjoyment. Enjoy it!
"This is a terrifically well recorded album of pleasantly performed guitar music that is sure to impress (and soothe) almost anyone....does the album actually sound as good as what's written about the processing? Well, it sounds pretty good, that's for sure. Indeed, it's one of the finest-sounding guitar albums I've ever heard. The instruments have a warm, smooth, natural appearance, much like hearing them live in the room with you. Recorded on analog tape (and remastered digitally), the sound betrays no digital edge. The miking is somewhat close in order to capture a full fidelity dynamic range and transient impact, yet it's not objectionably close. The duets and trios are especially well spaced across the sound stage, and the room reflections are well judged. This is an audiophile disc, to be sure, and as such it probably sounds better in accordance with the quality of one's playback equipment." - John J. Puccio, Classical Candor