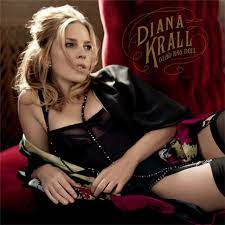 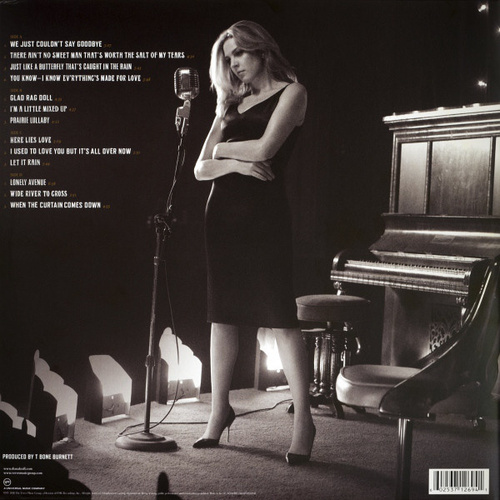 180g Vinyl Double LP! Mastered by Gavin Lurssen at Lurssen Mastering! Pressed at URP!
Diana Krall is getting "Glad" on a journey to the past with her follow-up to 2009's Quiet Nights.
Diana Krall's extraordinary album "Glad Rag Doll" released on Verve Records, is an exhilarating and adventurous exploration of new sounds, new instrumentation and new musicians. It stars a singer and piano player, filled with mischief, humor and a renewed sense of tenderness and intimacy.
The record reveals itself at that remarkable vanishing point in time where all music; swinging, rocking and taboo, collide with songs of longing, solace and regret. All are made new again in a vaudeville of Krall's own imagining.
It is at once a major departure and a natural progression for the gifted musician. Diana simply calls the album "a song and dance record".
"We all just went in there as if the songs were written yesterday. I didn't want to make a period piece or nostalgia record," said Krall.
In fact, these are songs that Krall has spent a lifetime contemplating. Both her childhood home and her current address are stacked with 78rpm records and song folios filled with precious and unpolished gems, songs that have not worn out their luster from repetition.
If any of these songs could be identified as "20's or 30's music", then they are 20's or 30's songs as imagined for the 21st Century.
The same could be said for a startling rendition of the Pomus classic, "Lonely Avenue", first cut in the 1950s.
The contemplative, contemporary reading of the old Gene Austin recording of "Let It Rain" finds a sympathetic echo in Krall's exquisite rendition of Buddy and Julie Miller's more recent ballad of spiritual longing, "Wide River To Cross".
Working for the first time with renowned producer T Bone Burnett and engineer Mike Piersante, Krall revels in a fresh sonic playground captured in the vivid grain and deep resonant focus of analog tape. Burnett has assembled a distinguished cast of remarkable men to complement Krall's piano contribution at an 1890s Steinway upright.
From the hushed to the howling, Marc Ribot's poised and sympathetic solo guitar accompaniment on the title track contrasts beautifully with a range of surprising sounds and colors.
As ever with a Diana Krall record, her distinctive feel and unique sense of time is crucial. She has established a new and exciting rhythmic rapport with drummer Jay Bellerose and bassist Dennis Crouch that has let loose some of her most joyous piano playing heard on record to date.
Among the new elements brought into the spontaneous arrangement process are the mysterious, sometimes comedic commentaries coming from the keyboards of Keefus Green.
The new sound, driven by Marc Ribot's guitar playing, is evident on "There Ain't No Sweet Man That's Worth the Salt of My Tears," a song written by composer Fred Fisher. Ribot also appeared on the Burnett-produced "National Ransom," the 2010 release by Krall's husband, Elvis Costello.
"It rocks. It swings. It shuffles. It's sexy, sly, intimate, and exhilarating." - Associated Press
"Enthralling... I'd call it her nimble, witty, change-of-pace record." - Entertainment Weekly
"Krall's work on the piano has perhaps never sounded so rock-n-roll." - American Songwriter
"Krall is masterful in her interpretations" - JazzTimes

Selections:
LP1 - Side A:
1. We Just Couldn't Say Goodbye (Woods)
2. There Ain't No Sweet Man That's Worth the Salt of My Tears (Fisher)
3. Just Like a Butterfly That's Caught in the Rain (Dixon/Woods)
4. You Know I Know Ev'rything's Made for Love (Sherman/Tobias/Johnson)
LP1 - Side B:
1. Glad Rag Doll (Ager/Dougherty/Yellen)
2. I'm A Little Mixed Up (James/Johnson)
3. Prairie Lullaby (Hill)
LP2 - Side C:
1. Here Lies Love (Rainger/Robin)
2. I Used to Love You But It's All Over Now (von Tilzer/Brown)
3. Let it Rain (Kendis/Dyson)
LP2 - Side D:
1. Lonely Avenue (Pomus)
2. Wide River to Cross (Miller/Miller)
3. When the Curtain Comes Down (Hoefle/Lewis/Sherman)